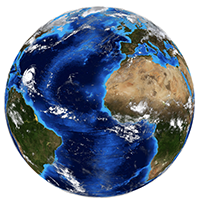 Did you know that 71% of Earth’s surface is covered by water while 97% of that is saltwater and only 3% is freshwater. That’s why Earth is predominantly blue when seen from outer space, and the reason we call it the “Blue planet”.

The deepest place on the planet is the Mariana Trench near Guam, that is  11,022 m bellow the surface of the sea.