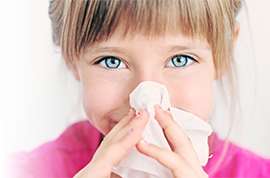 The most popular function of the nose is the sence of smell, but it has many other important roles. You could also call it an air‑conditioning, cleaning and inspection unit of the body. The air we breathe is far from ideal – it can be excessively hot, or even ice cold. it can be polluted by various hard particles. And this is why the nose is here, the gateway to the respiratory tract.

Our sense of smell is not only important for smelling roses or other odors. We check the quality of the air we breathe with our sense of smell. For example, when we smell a dangerous gas, we hold our breath. This is how we protect ourselves.

The ideal air for the lungs has a temperature of 37 °C and a relative humidity of 100%. So as it passes through the nasal cavity inhaled air, warms up or cools down, while becoming humidified at the same time. Of course it’s easier for the nose to reach a relative air humidity of 100% if the inhaled air isn’t overly dry – the optimal humidity of the environment is 45%. If your environment has a considerably lower humidity, then the nose’s proper functioning could be damaged. And if the air isn’t properly regulated, then the lungs could be subsequently damaged.

Let’s imagine that we breathe in some bacteria. If the mucous membrane is too dry, many more bacteria reach the lungs. If the mucus on the cilia is too thick, they cannot move enough – their movement will stop, and while the bacteria do get caught on the mucus, they are not removed. So they reach to the mucous membrane where they can cause inflammation. A large amount of mucus is not ideal – the cilia cannot move enough in this kind of environment.

How to support the proper functioning of the nasal mucosa?

the most common problem is a thickening of the mucus caused by insufficient humidity, which stops the cilia’s movement and the removal of pollutants. Sufficient humidity must be ensured – this will dilute the mucus, soften any scabs in the nose that emerged when the mucous membrane was dried out for a long time, and subsequently restore the natural function of the nose. Delmar Isotonic solution is very useful. it has the same concentration of ions as bodily fluids, so they are absorbed well and don’t cause stuffy noses or dry membranes. By caring for the nasal mucosa, we can lower the risk of infection of the upper respiratory tract.