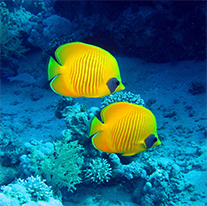 Seawater dehydrates you. The amount of water needed to flush the excess salt from your body would be more than what you drank. But many animals that live in the ocean have evolved ways to pump out the extra salt while keeping their water levels in balance.

Sea fish have a lower salt content in their blood plasma than the salt content in Sea. They have a well-developed mechanism that regulates this by preventing “dehydration” of their bodies. In seas with lower salt concentration (hypotonic) or in seas with a higher salt content (hypertonic) fish need to drink lots of seawater to stay hydrated or must pump out the excess salt, both through their kidneys and using specialized cells in their gills.

Freshwater fish adapt exactly the opposite mechanism – their blood is denser than the surrounding freshwater, therefore their bodies are sufficiently hydrated. Excess water is removed by excreting a diluted urine (with a minimum of salt) while at the same time they actively take in salt through the branchial epithelium.

Salmon and eels are fish that alternate between fresh and salt water. Their bodies are designed in such a way that they change the composition of their blood according to the environment where they are living.

Sharks can adapt themselves to survive in a broad range of water salinities, from the salt water of the ocean to the fresh water of the lake through osmoregulation. Osmoregulation is the ability of the Sharks to maintain a constant concentration of water in their body.