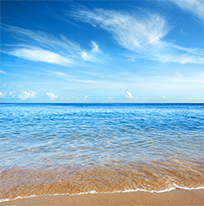 The salinity of the saltwater is a given concentration of salt dissolved in the water. The Sea salt is made up of about 70% sodium chloride. The average salt content in seawater is 36 g/l. The salinity of the sea is affected by evaporation or by the inflow of freshwater through rainfall, river tributaries, melting glaciers and the circulation of saltwater. The salt concertation of the sea varies by area. In the Mediterranean Sea for example the sea salt concertation is 38 g/l while at the Red Sea 42 g/l and 4 g/l in the Baltic Sea. As a rule of thumb, there is higher salinity concentration in subtropical seas, whereas the evaporation is higher and a lower influx of freshwater. The opposite applies namely, lower concentration of salt in water, in the polar seas.

Besides the Caspian Sea, there are some lakes that are also salty. One of the most famous salty lakes on the planet is the Dead Sea, its surface and shores are 420 meters below the sea level, and it is 380 meters deep. Its salt concentration reaches 33.7%, which makes it among the saltiest lakes on the Planet (It is almost 10 times more salty than the Mediterranean Sea).